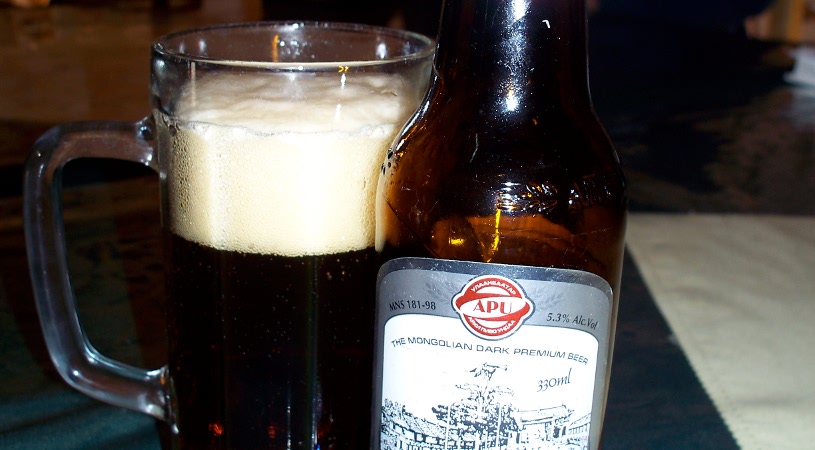 This will be the last post on this blog for an indefinite period as I turn my attention to other projects. I thought it would be fitting for the last post to be inspired much as the first post (here) was nearly two years ago with an interesting question raised by my fellow blogger Julian Dierkes over at “Mongolia Focus.”

Recently, Julian pointed out that a World Health Organization (WHO) interactive map on alcohol consumption around the world put Mongolia at a relatively low 5.8 liters of “pure alcohol” consumption per person per year (see map here). Given that alcoholism, in popular belief, is one of Mongolia’s most acute public health problems, this number seemed remarkably low. 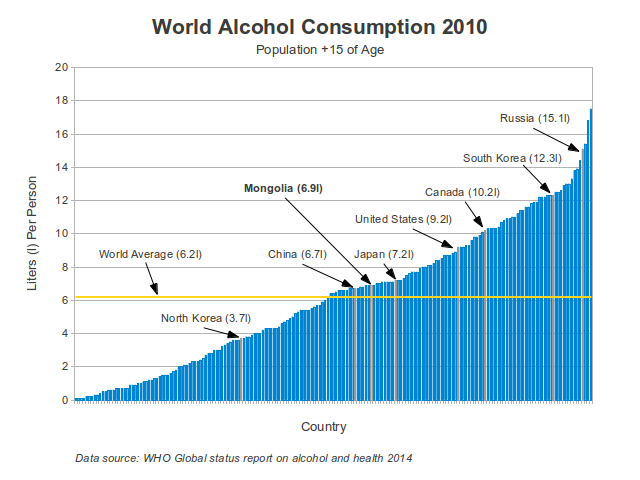 The graph above shows Mongolia relative to other countries using slightly more up-to-date WHO data.1 Mongolia is right in the middle of the pack, just above the world-wide average of 6.2 liters of “pure alcohol” per person per year. “Pure alcohol” meaning the volume of alcohol consumed from low alcohol content beverages like beer to high content beverages like vodka. Drinkers in more economically developed countries like the US, Canada, and South Korea out consume Mongolians by pretty significant margins, and Russian drinkers, who are often used as a companion comparison to Mongolian drinkers, might as well be from a completely different planet. The data represented in this graph is so counter to the popular conception of alcohol consumption in Mongolia that one might challenge its validity.

I decided to test whether the WHO estimate squared with another source of data. The Ministry of Industry and Agriculture publishes regular reports on the amount of alcohol produced and imported in Mongolia.2 Production and imports are not necessarily consumption, but I think it is a reasonable proxy in Mongolia’s case. The table below presents production and import data for alcoholic beverages and an estimate of per person alcohol consumption during the same period covered by the WHO estimate. On this basis, the estimate derived from the Ministry data is in the same ballpark as the WHO estimate at 6.61 liters per person. 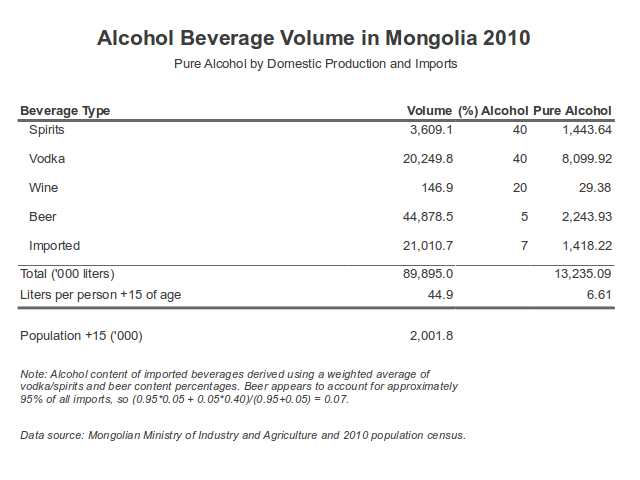 That does not prove the WHO estimate is correct, of course, because WHO possibly incorporated the same or similar government data in its estimate. But, digging deeper into the issue, I discovered some interesting facts. First, there is a significant difference in consumption between genders. The graph below shows Mongolia compared to the selection of countries highlighted in the first graph above. Men consume over five times as much alcohol than women in Mongolia. Not really a surprising result given my own personal experience, but it is significant to note that women, which make up just over 50 percent of the population, basically don’t consume alcohol. The volume of 2.2 liters per year consumed by women is roughly equivalent to 2.5 glasses of wine per week.3 It should also be noted that Mongolian men still consume less than men in the United States, Canada, South Korea, and Russia on average. 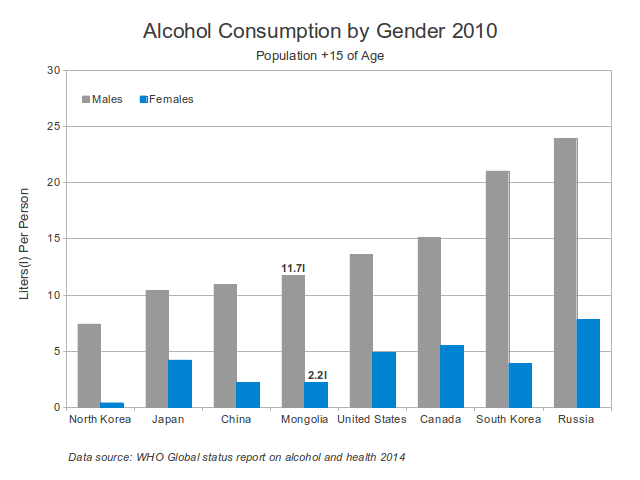 Second, a separate WHO survey conducted in 2006 measured the prevalence of alcohol consumption in Mongolia and found that 25 percent of people consumed 86 percent of all alcohol.4 The imbalance in consumption across all consumers and between genders suggests that Mongolia’s image as having an extraordinary alcoholism problem is driven by a small, gender specific segment of the population, while everyone else either abstains or consumes insignificant amounts of alcohol throughout the year. Does that mean Mongolia doesn’t have a public health problem when it comes to alcoholism? No, of course not. I think what it means is that a huge part of the problem is not cultural but rather a lack of public services supporting prevention and treatment, and maybe this difference is what separates Mongolia from economically developed countries like the US which consume much higher rates of alcohol without having an image of out-of-control and endemic alcoholism.

A simple way to prevent over-consumption among people at risk of alcoholism might be to make pure alcohol more time consuming to ingest. The graph below shows the cost of pure alcohol for various types of beverages. The prices come from a non-scientific survey of my local supermarket. Cheap beers like Borigo with high alcohol content cost roughly the same amount as cheap vodkas in terms of alcohol per Tugrik (the yellow line). Imported beers and wine with lower alcohol content are much more expensive per unit of alcohol. But, if the government were to tax consumption so that the cost of pure alcohol were equivalent across beverage types (the blue bars), vodka would appear much more expensive than both wine and beer. From a consumer stand point, both wine and beer would become more appealing options for getting alcohol into one’s bloodstream even though the per unit cost were the same. Consumers would get more for their money in terms of beverage but less in terms of alcohol. There is a limit to how much a stomach can hold at any given time, so the end result would be a decline in overall alcohol consumption even for hardcore drinkers. At the moment, the government makes it way too easy for people with alcohol addictions to over-consume. 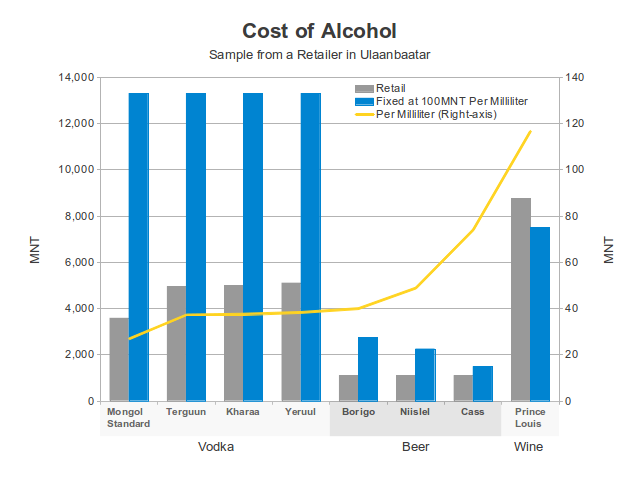 This data shouldn’t actually come as too much of a surprise when you think about it. Although Mongolians themselves might say they have a pervasive culture of drinking, comparisons with other countries would suggest otherwise. For example, Mongolians do not, as a general rule, consume alcohol at meals like the French or Italians. Alcohol is not a staple for everyday consumption like beer in Germany or the United States. It is reserved for special occasions such as a visit from an honored guest or holiday. Even though home-brewing of yoghurt spirits and fermented mare’s milk are common substitutes for manufactured drinks, alcohol is still considered something special to give rather than consume like fancy chocolates or specially cultivated fruit in Japan. Alcohol is sporadically consumed, but when it is consumed, it is often consumed in excess by a certain demographic–I’m thinking of you, Tsagaan Sar and men between the ages of 25 and 50. This behavior is arguably facilitated in large part by the cheap availability of purer forms of alcohol. What the data and WHO reports suggest is that Mongolia’s alcohol problem, much like its other health and social problems, is a bit more subtle than the popular image of an ingrained culture of drinking and rampant alcoholism might suggest.

A toast is definitely in order to data for once again challenging and forcing us to rethink our popular images of Mongolia. Or, as people in the US say, “It’s Miller time!”