Speculation: OT Dispute and the Budget

The silence is deafening in the Gobi. Not living in the thick of the Ulaanbaatar bustle has many upsides, but a serious downside is the metaphoric silence of news or even rumors about important issues like the OT dispute.

Last week ended with a sense that tensions had eased between the government and Rio Tinto, and the OT board of directors approved stop-gap funding for the month of March to give some breathing room for continued negotiations later in the month.1 Making the best of the situation, I am turning the silence into a chance to speculate on a contextual point that seems to have fallen through the cracks in the reporting on the dispute–the 2013 national budget. 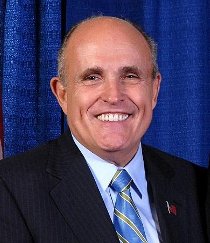 His advice is to under promise and over perform

The 2013 national budget was passed by parliament in November 2012, and the government made the very surprising (in my opinion) choice to include approximately USD 300 million from renegotiating tax and royalty provisions in the 2009 Oyu Tolgoi (OT) stability agreement as part of the budget revenue projections. In poker they call that going all in, and as an opening gambit it needlessly put the government in a poor negotiating position. The move went against former New York mayor Rudy Giuliani’s dictum that successful leaders under promise and over perform. The government made an improbable promise of raising hundreds of millions of dollars of additional revenue on the hope of renegotiating a complex deal that took years to complete. It was doomed from the start.

Unfortunately it does not stop there. The World Bank published a report on the 2013 budget shortly after it passed through parliament, and the analysis suggested that, even if the government could succeed in getting additional revenue from renegotiating the OT agreement, the economic growth and revenue projections still appeared overly confident and optimistic, especially given the economic slowdown in China.2 On that basis, one can assume the government started 2013 in a very shaky financial situation, and the OT dispute has potentially made it worse by producing negative knock on effects in the rest of the economy. The original annual growth projection for the economy in the budget was 18.5 percent (!), and it looked overly optimistic to the World Bank before the OT dispute fully erupted.3 What does that optimism look like now?

As it seems with every political issue, there is an added twist to the plot. This year’s budget is the first to come under the Fiscal Stability Law passed by parliament in 2010.4 The law is intended to make the national budget anti-cyclical by saving excess revenues in good years and drawing on savings in bad years. In theory this should mitigate the boom-bust cyclical effects of a minerals dependent economy. In 2009 the economy was cratering as a result of the global financial crisis depressing minerals markets which in turn exposed several structural problems with the economy and the government’s finances. The government required an infusion of USD 153 million from the IMF to meet its short-term obligations.5 It is easy for conspiracy theorists and critics of the OT agreement to assign nefarious explanations now for why the coalition government rushed to sign the agreement in the latter half of 2009, because people generally have short memories when it comes to politics. But, Graph 1 tells the whole story without the need for embellishments like back-room deals and triple-crosses. Mongolia was in a desperate financial situation and signing the agreement held the promise of additional infusions of much needed revenue. The Fiscal Stability Law was conceived as a way to prevent similar crises in the future, and it legally binds the government to spending and savings targets in each budget. 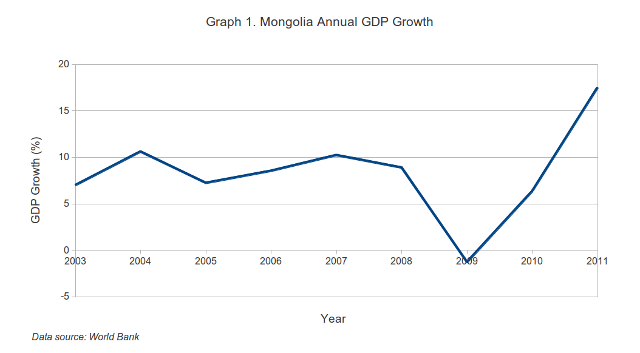 The World Bank calculated in its analysis that the government would begin 2013 already up against the structural deficit limit of 2 percent of GDP prescribed in the Fiscal Stability Law even when accepting all the government’s revenue projections.6 The financial situation has continued to deteriorate since then. The attempts to renegotiate the agreement have thus far failed. Erdenes Tavan Tolgoi ran out of operating funds for the Tavan Tolgoi coal mine earlier in the year, and it has required its own bail out. General confidence in the business community has been rattled by the on-going OT dispute. The list goes on and on. Unless a revenue miracle occurs, the government will have to fix its budget problems either by cutting expenses or by ignoring the Fiscal Stability Law. 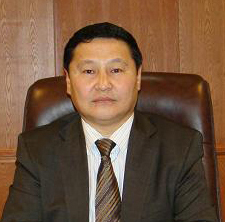 The law is new, so there is no precedent for the real political consequences of ignoring it. The law does spell out “punishment” for violations in Article 18.3. It states that violations are “a basis for raising the issue of dismissal of the Government (cabinet).”7 That only means something if there are the votes in parliament to make a dismissal happen, and one can only speculate at this point about whether the current coalition government is politically vulnerable enough for that provision in the law to exert any real pressure. Even without the law, the government faces the daunting prospect of filling an ever widening budget deficit while it publicly wrangles with Rio Tinto over its only real source of new revenue in the short-term. A government can ignore laws, but it can’t ignore an an empty bank account.

It seems reasonable to surmise that the deficit pressure is driving some of the he-said-she-said dispute over the loan-for-tax-credits agreement signed in 2011 by the government and OT. The government has a very strong need to make sure another USD 150 million doesn’t vanish from its revenue stream by allowing Rio Tinto to exercise its tax credit option. Getting Rio Tinto to back off on using that option, in fact, potentially provides a partial political victory in making it seem as if the government was able to squeeze an additional USD 150 million out of OT by conflating it with the original goal of raising USD 300 million from renegotiating the stability agreement. Of course, in reality it will have only kicked that financial problem down the road. The loan-for-tax-credits agreement, after all, was a loan agreement, so the government is still on the hook to produce the money or to have another argument with Rio Tinto about the terms of payment later on.

I find it very easy to sympathize with the current government’s predicament as it takes responsibility for fixing prior financial mismanagement and learns in the process the economy is no longer simple and linear but rather complex and geometric. The financial situation of the government is not good and everything it does seems to make it worse. From a classical economic perspective it looks like the current OT dispute has cost Mongolia a lot more in collateral damage to the economy than the USD 300 million it intended to get from Rio Tinto in the first place. This is without actually doing any sort of in-depth analysis of opportunity costs. It’s just that bad. There are tough decisions ahead if the government is serious about really fixing the problems and adhering to its own Fiscal Stability Law. The last few years do not provide much reason for optimism that the government or the political system is prepared to make those tough decisions before it is faced with an unavoidable crisis. It is a depressing thing to contemplate in the silence produced by the intermission in the OT dispute.