Ten Tugriks ain't worth what it once was. (Image source: Wikipedia.)

Last week the Tugrik to US Dollar exchange rate crept back above 1,700. Unlike when it happened earlier in the autumn, this time around it hardly made the news. It is a great example of how quickly extremes can become the new normal in the public mind. But, the continuing slide of the Tugrik is a troubling sign that the Prime Minister’s “Reform” government has thus far failed to reverse Mongolia’s mounting economic woes. A striking illustration of this is the following time series graph plotting the monthly rate of the Tugrik against the US Dollar through October 2013. 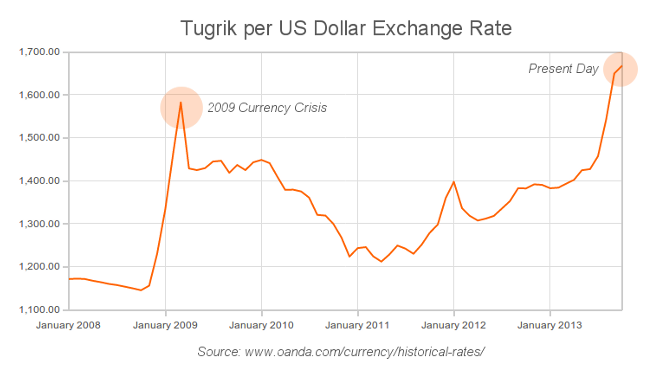 In 2009 Mongolia faced a currency crisis which was a symptom of wider fiscal problems brought on by the world wide economic crisis. As described by the IMF, “growth was stalling, international reserves were rapidly being depleted, there was insufficient financing to meet the spending needs of the government, and the banking system was under pressure. The economy was on the verge of collapse.”1 The government required a USD 232 million loan from the IMF, fiscal reforms, and the signing of the Oyu Tolgoi investment agreement to turn things around.2 A very similar situation is forming in the present day with declining foreign direct investment, under performing coal exports, untenable budget commitments, and significant off budget spending (i.e. printing money). The depreciating Tugrik represents a strong indicator that the economy is again in trouble.

It is also a sign that life is going to get tough for ordinary people if it hasn’t already occurred. The exchange rate is extremely important in daily life in Mongolia, because most things people consume are imported. As a result, the strength of the Tugrik against foreign currencies is directly tied to purchasing power. The rapid depreciation of the Tugrik points to an increasing probability of spiraling price inflation in the coming weeks which will hit the country’s poor particularly hard as we enter winter.

The government needs a massive infusion of foreign reserves to reverse this trend, but so far the cabinet has failed to find a way to do it. The only real option at this point is through loans, and members of the cabinet have been making trips to places like Turkey, Japan, and China to open up lines of credit. It is an unfortunate come down for a country that was riding high only a year ago.

If you’re interested in learning more about the current state of the Mongolian economy, check out the recently published M.A.D. Investment Solutions Macro Report. It gives a good sense of all the factors that underlie the depreciation of the Tugrik and presents a compelling argument that the economic problems facing the government are predominantly self-inflicted.