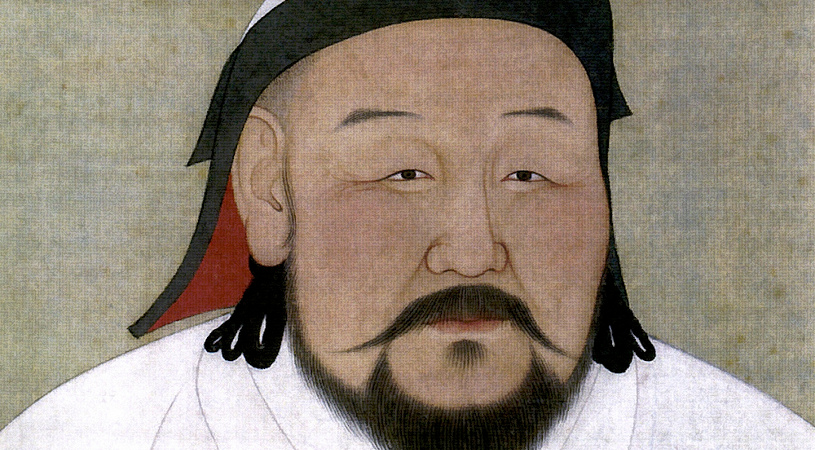 Not the most popular of the Great Khaans for boys' names. (Image source: Wikipedia.)

The National Registration Office (NRO) website is the place to go for fun factoids about names, families, and population. As the government agency responsible for recording births, registering marriages, and issuing national ID cards, among other functions, it possesses an amazing amount of information about citizens. For people like me who love factoids, the NRO regularly publishes surveys of its database with information such as how many men have the given name Улаанбаатар (Ulaanbaatar a.k.a. Red Hero a.k.a the Capital of Mongolia).

The answer is out of the 78 Ulaanbaatars that are still living, 66 are men.1 The oldest Ulaanbaatar was born in 1939 and the youngest in 2003.2 Ironically more Ulaanbaatars live outside Ulaanbaatar than in the capital city itself.3 If you think it is amusing to name a child Ulaanbaatar, then you might enjoy some of the other rare names the NRO has recorded. There are 5 people with the name Нэгдэл (Negdel – cooperative).4 One person is named Хрушев (Khrushchev a.k.a. the Soviet Premier).5 And, then there are the longest names:6

Some parents also seem keen to give children historical names. There are 343 people named Чингис (Chinggis a.k.a. Genghis), and there are 3,987 people named Тэмүүжин (Temuujin a.k.a. Genghis before he was Genghis).7 I actually know one of those Temuujins. The NRO lists 106 people named Өгөөдэй (Ögedei a.k.a. Chinggis’ third son and successor to the throne) but no one named Хубилай (Kublai a.k.a. Chinggis’ grandson and the first Yuan Dynasty emperor).8 Does this mean there are no Kublais in Mongolia? I guess the consolation is that he has a vodka brand named after him.

Finally, there are 1,892 people who have birthdays on February 29th.9 Fourteen of those people are named Батэрдэнэ (Bat-Erdene – strong jewel),10 which is not too surprising given that it is the most popular name with 14,540 people and counting.11

I should mention that the numbers in this post come from surveys conducted by the NRO at different times, and unfortunately it is not noted on the web pages when the surveys were conducted. Some of the web pages appear to have their publication dates in their links, so on that basis it looks like most of the data comes from 2009-2011. Nevertheless, I think all the numbers are fairly accurate approximations (if not precisely correct) even a few years after the original publications given the stability of populations. Accuracy is always better than precision in science if you have to chose one over the other, and it is great that the NRO makes this information available to satisfy the unending need for accurate and interesting factoids.