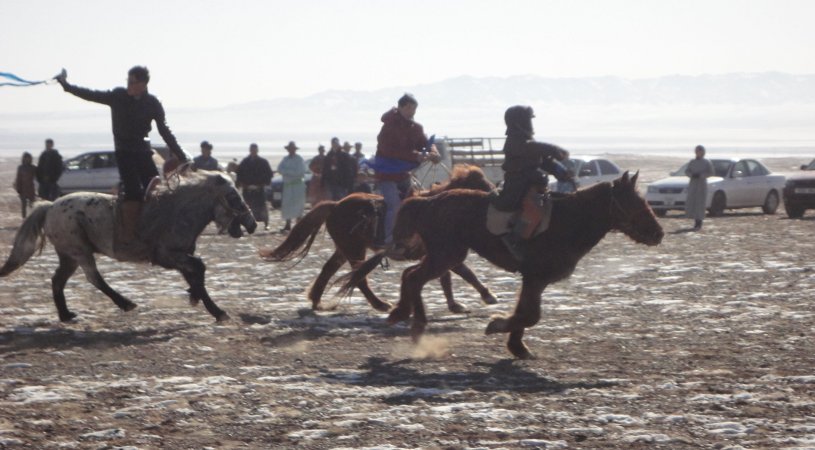 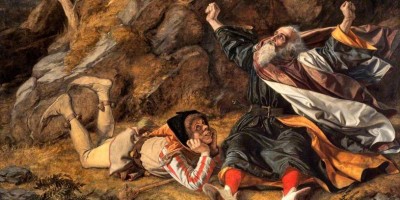 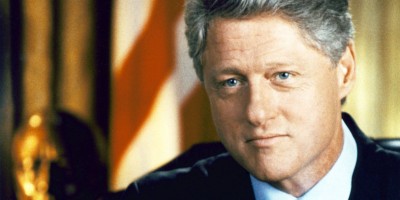 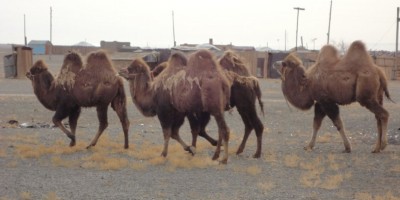 The time has arrived to share the origin of this website’s name. A reasonable guess is that it is a form of conceit on my part to suggest that I provide the first and last word on all things Mongolian, but “The Mongolist” has two meanings completely unrelated to what some (which includes my wonderful wife) have called my stunning lack of humility.

Instead, the first meaning is as homage to the UK magazine “The Economist.” For me that magazine sets the standard for analysis that is both rewarding and enjoyable to read (just think of those droll picture captions), even when I sometimes disagree with the magazine’s editorial positions. I generally feel a bit smarter having read something in The Economist. I want people to feel that way when reading about Mongolia, and that is the standard I have set for this website. I hope it is a standard reached at least sometimes. The second reason is a silly play on words. The Mongolist sounds like “The Mongol List,” and I initially conceived of the website as being a place for informative lists of facts or snippets of information about Mongolia. That idea has evolved into a weekly round up of interesting news, facts, and corrections not big enough for their own posts. This is the first “The Mongol List” in the series. 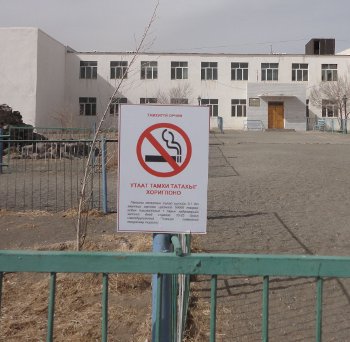 One more reason to hate school

1. The tyranny of the non-addicted – Mongolia’s new anti-smoking law came into force March 1. The editorials in newspapers about the law have been both strongly positive and strongly negative. I have determined that one’s position on the issue is highly correlated with one’s level of addiction to nicotine. Signs have begun appearing in public areas reminding people that smoking is not allowed inside and within 50 meters of buildings. The fine for violating the law is reportedly MNT 50,000 (approx. USD 36). One aspect of the law appears unworkable in practice, though. Stores, restaurants, and bars within 500 meters of schools are prohibited from selling tobacco products. Given the density and mix-use (that’s a polite way of saying unregulated) zoning in Ulaanbaatar and the small size of many rural towns, it is not difficult to imagine a majority of businesses that sell tobacco products are in violation of the law. The spirit of this provision makes sense, but the government should consider revisions that maintain the spirit while conforming better to reality.

2. Ms. Gantuya vs. Oyu Tolgoi – In a recent post (here) I wrote about the sister of firebrand MP S. Ganbaatar and her wrongful termination suit against Oyu Tolgoi. According to local papers she won her case, and the judge ordered Oyu Tolgoi to hire her back with back pay. In a press conference after the verdict, she declared, “We have won,” implying that she represented the plight of all underpaid and wrongfully terminated citizens. According to Ms. Gantuya, she was paid USD 2,500 per month as a project specialist, and she claimed in her suit that Oyu Tolgoi had terminated her for openly complaining about salary differentials between equally qualified Mongolian and expatriate employees. Whether this case will have any lasting effect on salary levels or public opinion about Oyu Tolgoi remains to be seen. It does put the whole affair in perspective when you consider, though, that my neighbor who taught Mongolian language for 42 years lives on a pension of approximately USD 120 per month. The labor market in Mongolia is still a very cruel market for some.

3. Minister Gankhuyag vs. Entree Gold – While reading the transcript from the February 1 session of parliament in which President Elbegdorj discussed the Oyu Tolgoi project, I had a wonderful ah-ha moment regarding the Entree Gold license issue, which I complained earlier was not very well reported on in the press (here). For me everything was illuminated with an exchange between the President and Minister Gankhuyag (just below the second image here). When the issue of Entree Gold’s licenses came up in the session, the point of discussion was whether the licenses had been properly transferred to Oyu Tolgoi LLC thereby bringing 100 percent of the rights to mine the deposit directly under Oyu Tolgoi LLC’s control. The conclusion seemed to be that the transfer of the licenses had not occurred, and Entree Gold could still mine the area and escape responsibility to share 34 percent of profits with the government. The 2009 stability agreement clearly states that the licenses will be upgraded from exploration to mining licenses and transferred to Ivanhoe Mines Mongolia Inc LLC, which eventually became Oyu Tolgoi LLC. My understanding of Minister Gankhuyag’s reason for suspending the licenses, based on media reports, was that they had been upgraded to mining licenses without proper authority at the cabinet level by the last government. An odd inconsistency, made even odder by suspending the licenses on the basis of what amounts to an administrative error on the part of the government itself when the issue discussed in the session of parliament, on the face of it, seems like a more legitimate concern and potential violation of the agreement. That raises other questions, of course, but from a legal standpoint the suspension seems like much ado about nothing given that the 2009 stability agreement states one way or another those licenses are intended to be held by Oyu Tolgoi LLC.

5. Holy inconsistent cost-estimates, Batman! – A shout out to Michael Kohn for his very helpful and regular reporting from Ulaanbaatar. In a recent article on Bloomberg (here), Michael reported that the government has estimated a 40 percent budget overrun for the Oyu Tolgoi project while Rio Tinto is claiming it is more in the 18 percent range. “Where are these numbers coming from,” I thought. Turning to Twitter for answers, I asked Michael what the baselines were for these estimates, curious to see if both sides are even starting at the same place. The exchange is below, and it shows how the estimates change depending on who you ask and what the baseline is. Crikey, I don’t know who to believe now. 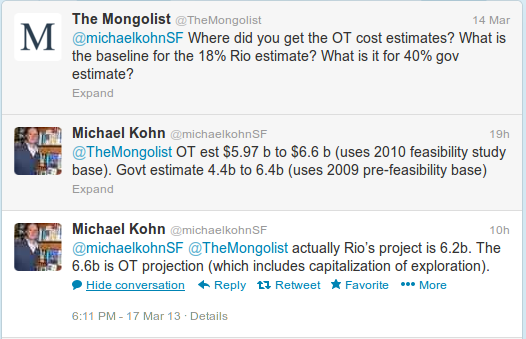 6. Anti-corruption efforts plod forward – The Independent Authority Against Corruption began collecting annual financial disclosures from elected officials and high-ranking bureaucrats this month, something the agency has done since 2008. This has coincided with a local push in Umnugovi to remind the public about laws protecting them from having to provide gifts to receive services. My wife, who works at the local school, has reported that the last several staff meetings have included reminders to teachers that it is against the law to receive gifts from students. As a colleague of mine used to say, “Evolutionary–not revolutionary–progress.”

7. “The Hermit of the Gobi” appears in public – I have two speaking events scheduled in April. On the 22nd I will give a short presentation at the Business Council of Mongolia monthly meeting and on the 23rd I will give a much longer lecture at the American Center for Mongolian Studies Speaker Series (see announcement here). The Hermit of the Gobi, as the kind Julian Dierkes at University of British Columbia has dubbed me, shall show his face in public. For those curious to see if the legend is true; that is, whether I am three meters tall and can shoot fire from my eyes, they are must attend events. I will also talk in-depth about interesting issues covered in this blog.