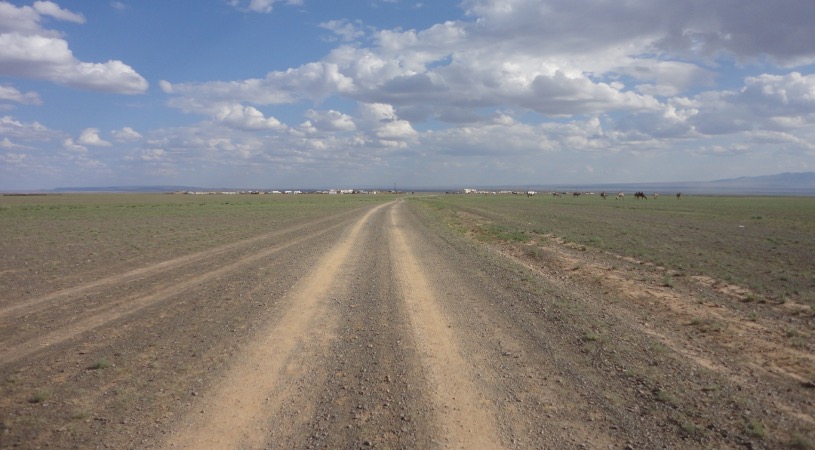 The World Economic Forum (WEF) recently published its “The Travel & Tourism Competitiveness Report 2013,” and you may have noticed, as I did, that the big story in the local news about the report was that Mongolia ranked in the bottom ten countries in terms of friendliness towards foreign visitors.

What the, wha?! This is literally a place in which you can show up on an unfamiliar doorstep and expect to be treated to a cup of tea before you’re even asked why you’re there. One of the least friendly countries in the world? Preposterous! I had to look at the report for myself to see how WEF could have gone so terribly wrong. What I discovered was far more interesting and useful than the local news coverage of the report let on.

The report is first and foremost an economic analysis examining the impact of tourism on local economies and providing insight into where countries can improve their tourism industries. The heart of the report is “The Travel & Tourism Competitiveness Index” which is constructed from 14 environmental, economic, and social measures called “pillars.” (This is strikingly reminiscent of the “growth poles” terminology in the recent World Bank infrastructure report referred to here). In turn, the scores for pillars are derived using various sub-indicators such as “enforcement of environmental regulation” and “attitude of population toward foreign visitors.” The latter being the sub-indicator that caught the attention of local news reporters. The data for these sub-indicators come from local and third-party data sources, as well as an “Executive Opinion Survey” (more on the survey in a moment). Mongolia’s overall rank in this year’s report was 99th out of 140 countries, improving its ranking over the previous two reports scoring 105th in 2009 to 101st in 2011.1 Close examination of Mongolia’s pillar and sub-indicator scores reveals that the surprise “friendliness” score is actually a relatively insignificant part of Mongolia’s overall rank, and the report actually highlights the more important issues of infrastructure investment and regulatory frameworks that are affecting Mongolia’s entire economy.

To illustrate what I mean let’s look at the “friendliness” score. It is derived, along with several other scores, from local perceptions collected by WEF using its “Executive Opinion Survey,” which is a survey of business operators in various sectors of each country’s local economy. Moving weighted-averages of the indicator scores are used in each report, and in the case of Mongolia there were 84 and 85 respondents to the 2011 and 2012 surveys, respectively.2 As such, Mongolia’s low rank of 131 out of 140 in the “friendliness” area was, in fact, self-assessed by those 169 local business operators. It is hard to quibble with a low rank that you give yourself, but this was not Mongolia’s worst score.

Table 1 shows other sub-indicators in which Mongolia did worse than 131st place. Quite quickly you can see environmental, infrastructure, and human capital challenges are dragging down Mongolia’s overall ranking. The environmental and transport sub-indicators contribute to very poor rankings in the “Environmental” and “Ground Transport Infrastructure” pillars with ranks of 137th and 135th out of 140 countries, respectively.3 The fact that Mongolia struggles in these areas may not be a surprise, but the magnitude of the struggle relative to other countries provides further evidence to support the argument Mongolia has a serious infrastructure problem. 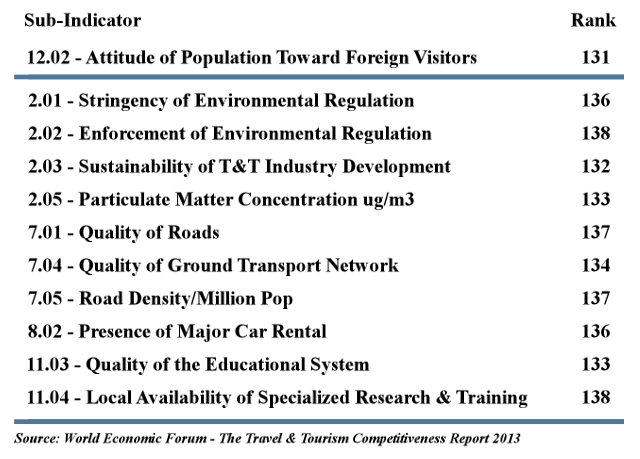 Take the “Quality of Roads” indicator. Only Romania, Haiti, and Moldova ranked worse (see Table 2). I am reminded of a comment from a well-travelled participate in an academic tour I once led through Khentii Aimag to historical spots associated with Chinggis Khaan and the Great Mongol Empire. We were reflecting on the trip as a group, and he said that one of the things he learned during the tour was that he was wrong about Tibet having the worst roads in the world. Even where there are paved roads, often times they are so damaged with potholes that people drive next to them on smoother dirt tracks. As a local doctor I was riding with recently observed, “They spread the asphalt on like butter.” Just enough to look like a road, but not enough to actually have a normal serviceable lifespan.

Environmental protection is also a major concern, especially given the rapid growth in the mining sector. Table 3 shows who ranked worse than Mongolia in enforcing environmental regulation. It is probably not saying much to beat Yemen and Haiti. Especially Haiti. I can’t think of any better wake up call to get serious about protecting a country’s environment than learning you barely beat Haiti.

The story these scores tell me is that if the government wants to diversify the economy into other sectors away from mining and if tourism is one of those sectors, then there is a fortuitous opportunity to kill two birds with one stone. This is certainly a possibility in the Gobi, if not in other popular tourist areas with significant mining activities. The infrastructure and environmental challenges that face mining in the Gobi are also the same issues affecting tourism, if only on a smaller and slightly different scale. The Gobi is one of the most popular tourist destinations in the country, attracting thousands of international tourists each year. A lack of roads in the region contributes to bilious clouds of dust from coal mining trucks, but it also contributes to a crisscross of tracks from tourist vehicles, marring an otherwise pristine desert floor. Poor transportation services increase the cost of mining, but they also increase the cost of doing any kind of service based business like tourism in the region. The lack of public services such as proper waste disposal and sewage systems degrades the overall quality of life but also makes absorbing increased numbers of visitors without damaging the environment unlikely. A strategic approach to developing mining infrastructure in the region that is also accommodating to tourism, as well as other service industries, would produce greater returns on public infrastructure investment, an argument the World Bank makes in its infrastructure report parenthetically referred to above.

Although it is a bit of a sting to have Mongolia rank so low in terms of “friendliness” towards foreign visitors, the country’s current inability to make tourism a viable and sustainable part of the national economy is the more important story of the WEF report. According to the report, Mongolia’s overall revenue from tourism has been steadily declining since its peak in 2007.4 In 2011 there was USD 218 million added to the economy from international tourism. To put that in perspective, that is less than the USD 280 million Oyu Tolgoi paid in taxes in 2012 according to a recent tax report published by Rio Tinto.5 The number of international visitors continues to increase year-by-year, but this is not translating into increased tourism revenue.6 It is a challenge for sure, but the challenges faced by the tourism industry are not unique. Improved prioritization and coordination of investments in mining that also benefit other sectors like tourism should lead to positive economic feedbacks. The WEF report provides yet another piece of evidence that it is critical to ensure effective public investment in infrastructure to support all industry and to protect the environment as Mongolia aims for greater economic growth.