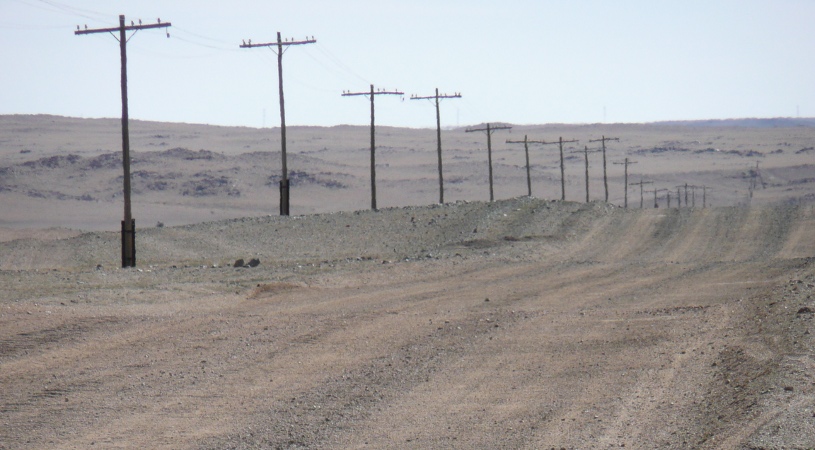 Recent news about executives at Mongolian Airlines (MIAT) being detained on embezzlement charges1 and my own recent post on accountability in the Gobi has made me think about the way corruption is usually discussed in the Mongolian context.

Bribery is the form of corruption that I most often notice in the media, and a quick check of the Google News Archive shows the search terms “bribery,” “money laundering,” “abuse of power,” and “embezzlement” along with “Mongolia” producing 372, 287, 196, and 95 articles, respectively.2 Not exactly incontrovertible proof, but it illustrates the point that bribery gets a fair bit of coverage relative to arguably more pernicious forms of corruption, in particular embezzlement. Bribery’s elevated position in the discussion strikes me as puzzling, because it seems like such a pedestrian and passe crime in a booming, speculative economy and weak regulatory environment like Mongolia’s. There is surely far more opportunity for those in positions of authority to embezzle funds from government and business organizations alike with a lot less effort than demanding bribes. This is not to suggest that bribery doesn’t occur or that there isn’t an unacceptable amount of it but rather that it is not necessarily Mongolia’s most significant corruption problem. The Asia Foundation (TAF) conducted a “Benchmarking Survey on Corruption” from 2006 to 2010 that produced some interesting data regarding corruption at the household level which provides some evidence to support this argument.

TAF described the purpose of the benchmarking survey as an attempt to statistically measure levels of bribery and abuse of power in order to contribute another perspective on the issue from what TAF described as less statistically rigorous measures such as Transparency International’s Corruption Index.3 Each survey was conducted with a random sample of 600 to over 1,000 households in Ulaanbaatar and various provinces, producing statistics with measurable levels of error (i.e. extrapolation to the wider population was possible). In each survey a series of questions was asked about perceptions of corruption and actual incidences in which households experienced some form of bribery. The surveys consistently demonstrated that the majority of respondents were quite able to identify different forms of corruption, even conflict-of-interest, and the level of bribe-paying and bribe-taking (both identified as crimes by respondents) at the household level was on a steady decline. 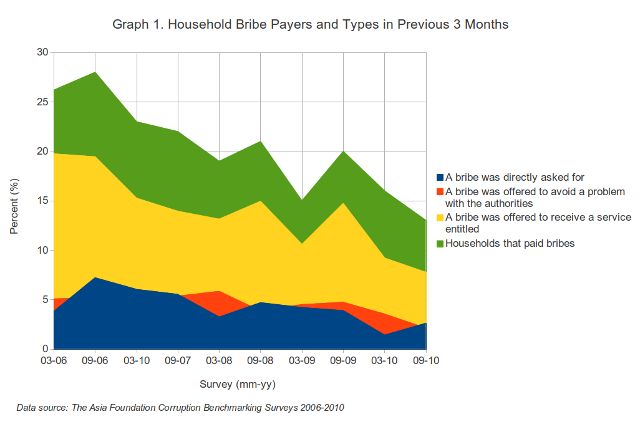 Graph 1 shows the percentage of households in each survey which responded that a member of the household had paid at least one bribe in the previous three months. In addition, the types of bribes paid as a proportion of the bribe-paying households are overlaid. Some households may have paid multiple bribes for multiple reasons, so these proportions do not add up to one hundred percent. Bribe-paying at the household level was significantly high, but it was lower than most discussions on the topic might imply. By the last survey, in fact, only 13 percent of households had paid bribes in the previous three months, and the steady decline seems to have been almost entirely attributable to a decline in people paying for “services they were entitled to” as opposed to the other two types of bribes which remained proportionally stable over the survey period. This category of bribe is better understood when you consider the top three professions that households paid bribes to in order of average frequency: doctors, administrative clerks, and teachers. The survey does not differentiate between someone paying a bribe to receive an entitled service that was outright denied or someone paying a bribe to expedite access to a service (i.e. to jump queue), but I am inclined to think the latter is more often the case given the professions listed and my own personal experiences.

In the seven years I have lived in Mongolia I personally have never found myself in a situation where I was denied a service I was legally entitled to and I have never detected a situation in which I was being solicited for a bribe to receive those services. I have found myself in plenty of situations in which things have progressed much slower than I would have preferred and the perceived incompetence of the person or agency I was dealing with could easily be construed as dodgy, but I cannot think of a single incident in which the process, although slow, did not unfold exactly the way the agencies’ own public rules stated it should.

I do recall a situation, however, in which an American acquaintance of mine once surprised me by saying he had paid a bribe to receive a marriage license for him and his Mongolian wife. I asked him to explain the details. He explained that he went to the government office to apply for the license and the clerk informed him to come back on Thursday to pick it up. It was Tuesday, and he wanted it that day, so he paid the clerk one hundred dollars to complete the license immediately. Although in a perfect world the clerk would have turned down the offer or, better yet, the agency would have had an official expedited service option, this acquaintance was almost entirely in the wrong and paid to have a service he was entitled to quicker but would have eventually received without the bribe.

There is an ethical subtlety there, and I suspect there is a lot of this going on in Mongolia. This form of “corruption” is not as worrisome as other forms of corruption, though, when you consider that much of it could be addressed by offering official expedited or preferential services and vigorously enforcing ethics rules within agencies. It is possible, in fact, that part of the reason for the decline in bribe-paying for entitled services over the survey period as seen in Graph 1 was due to the establishment of the Independent Authority Against Corruption (IAAC), creation of a hotline for people to report on corrupt practices, and subsequent convictions of high-ranking officials on corruption charges. Survey respondents recognized this form of bribery as a crime, and the existence of the IAAC and a sense that corruption laws might be growing some teeth may have provided a visible and real deterrent for petty bribery for the purpose of jumping queue.

Although there was still an unacceptably high level of bribery in 2010 when the last survey was conducted, it was much lower than one might expect and declining. The situation in Mongolia is far from perfect, but the recent spate of high-ranking government officials and businessmen, including former president N. Enkhbayar, being accused and convicted of bribery, abuse of power, and embezzlement,4 does provide hope that things will continue to improve. The strength of that hope, though, is dependent on the IAAC and the public at large keeping up with the far more pernicious and devastating crimes of abuse of power and embezzlement. Measures of household bribery levels are downright quaint in comparison to the kinds of corruption that are possible as billions of dollars continue to flow into unregulated and speculative investments in Mongolia’s booming economy.